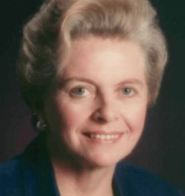 Shirley Chater, PhD, RN, FAAN, is a former president of Texas Woman’s University and an American Academy of Nursing “Living Legend.” During her tenure at Texas Woman’s University, The New York Times cited TWU for its participatory team management style. During her leadership a community health clinic for the underserved was created and managed by faculty of the School of Nursing in Denton. Dr. Chater also served for many years as a faculty member at the University of California, San Francisco, School of Nursing and at U.C. Berkeley in the School of Education, holding the position of Vice Chancellor for Academic Affairs at UCSF. A member of the American Academy of Nursing and the Institute of Medicine of the National Academy of Sciences, in 2000 Dr. Chater also was named a “Living Legend” by the American Academy of Nursing, in recognition of contributions to the nursing profession. Dr. Chater also served as Commissioner of the United States Social Security Administration during the Clinton administration (1993-1997) where she was responsible for 65,000 employees and a budget that exceeded $480 billion.
Galen College of Nursing (Galen) is accredited by the Southern Association of Colleges and Schools Commission on Colleges to award associate, baccalaureate, and master’s degrees. Questions about the accreditation of Galen may be directed in writing to the Southern Association of Colleges and Schools Commission on Colleges at 1866 Southern Lane, Decatur, GA 30033-4097, by calling (404) 679-4500, or by using information available on SACSCOC’s website (www.sacscoc.org). Galen consists of a Main Campus located in Kentucky and off-campus instructional sites in Florida, Ohio, Tennessee, and Texas. Branch campus accreditation is dependent upon the continued accreditation of the Main Campus. For complete information on the accreditation of Galen’s programs, please click here.