Being a Practical Nurse ‘Helped Me to Become a Great RN’ 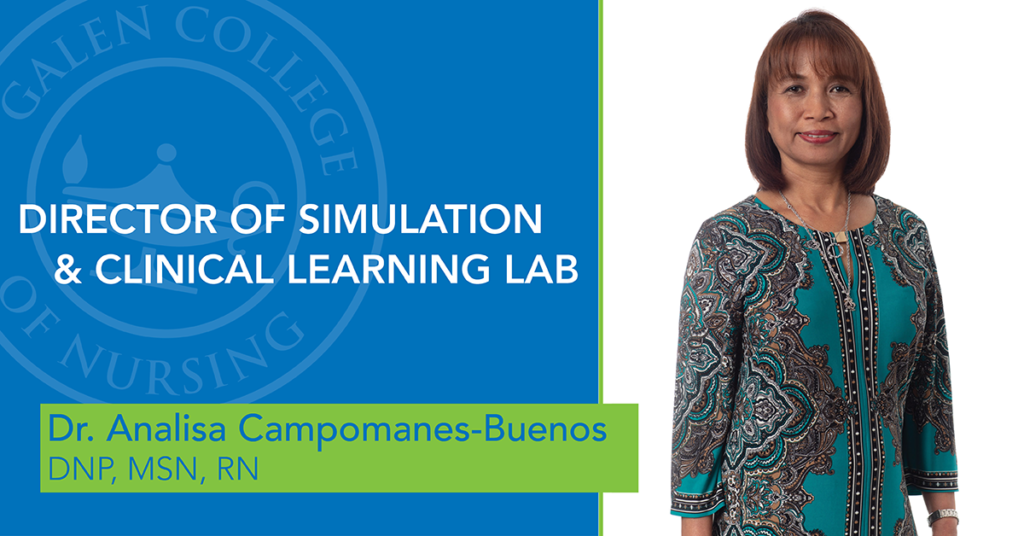 In 1996, she moved to Tampa Bay, Florida, got married, and resumed teaching, but she grew disenchanted with her career and took steps to pursue a lifelong goal: nursing.

“Teaching was just so different, and I think I had culture shock,” said Campomanes-Bueno. “I really wanted to become a nurse ever since I was a little kid, but I had to do what my family wanted.”

Eventually, she worked as a Licensed Practical Nurse (LPN) while finishing up her Associate Degree in Nursing (ADN) at St. Petersburg College.

While Campomanes-Bueno began working at Largo Medical Hospital, she discovered that she was eager to lend a helping hand to new nurses. Eventually, she became a nurse educator at the hospital.

“More than anything, I want to help the nursing students become great nurses, which is how I came into academia,” she said. “It’s a noble job because we are really helping to change lives.”

Campomanes-Bueno became interested in Galen College of Nursing after a co-worker began teaching at the Tampa Bay campus.  She joined her co-worker as a member of the faculty as a clinical instructor, teaching students in the Practical Nursing (PN) program. As an instructor, Campomanes-Bueno would often share her experience with students.

“Being a PN first is a good thing because it helped me become a great RN,” she said.  “Becoming a PN gives you a great foundation, and it helps students who want to continue to learn and become RN’s or BSN’s.”

Today,  Campomanes-Bueno DNP, MSN, RN is Director of Simulation and Clinical Learning Lab, and she is inspired by seeing Galen students graduate from the PN program.

Campomanes-Bueno credits a variety of resources that help PN students fulfill their goals. At the top of the list are the faculty who play an integral role in their nursing education.

“They’re not here just to teach and go home,” she said. “Our PN faculty are very nurturing. They are dedicated to helping students grow and thrive as nurses.”