Cincinnati Student Displays Passion for Helping Others Through Campus Involvement 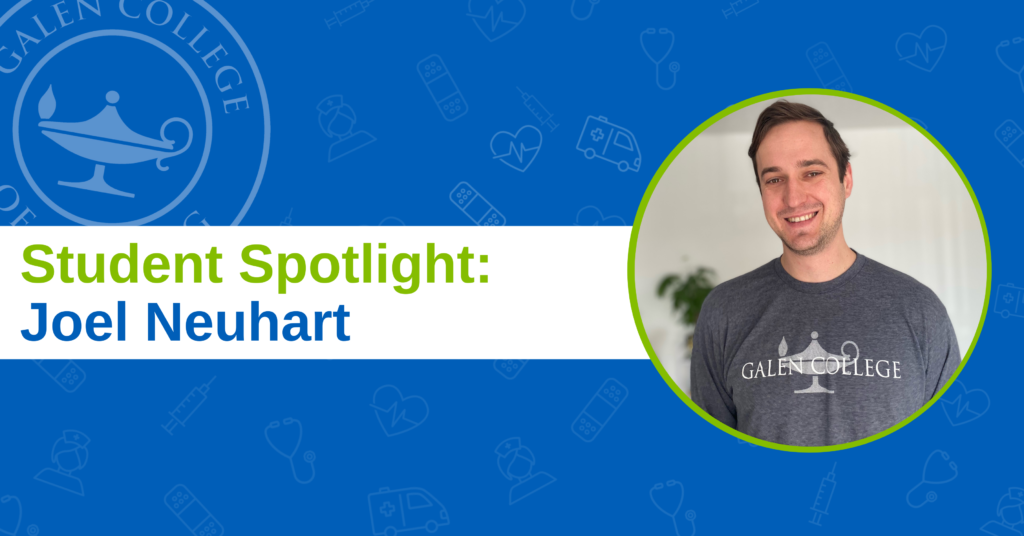 Joel Neuhart is a Cincinnati Campus student with a passion for education and a fierce drive to help others. Neuhart was on a hiatus from school after receiving his degree in Biomedical Science and utilized that time to research which medical field he felt a calling toward. He began researching and quickly found nursing was the right fit.

“Once I graduated, I wasn’t perfectly clear as to what direction I wanted to go. However, after a little digging, I discovered a vast field of possibilities with nursing. There are tons of specialties and opportunities to have direct patient interactions and continue learning new skills,” says Neuhart.

After realizing his calling was in nursing, Neuhart began looking into accelerated programs and found Galen College of Nursing. He attended an Open House event and notes that he felt invited and “invested in” from the moment he entered the building. Moreover, after discussing his interest in Galen’s accelerated program he was informed that some previous credits would transfer over and help him graduate even quicker.

“Galen provided me a welcoming environment, opportunities, resources, and a quicker route to my degree than any other program I looked into. At Galen, I felt that I was more than just a number. I was cared about by faculty, staff, and even students. After my Open House experience and a few discussions with my admissions representative, I knew I was making the right choice.”

While Neuhart’s dedication to his education is impressive, his passion to help others that stands out. He is a current Student Advisory Committee member and Galen Student Ambassador. When asked what drew him to get involved so heavily with the college, he explains.

“I love being involved in all things I do. Some people may say it’s over committal, but I have always seen it as extremely determined. I always want to make a positive impact on everyone I meet and being involved in Galen’s student organization has given me so many opportunities to do so.”

“Being a member of SAC allows me to act as a liaison between the college and students. We have been able to present some really great ideas and make a real positive impact on the student body. The way I have always looked at it is that, in nursing, we base improvements on evidence-based practice that is constantly evolving. So, why not take that mindset and implement it with our student body to make a lasting impact for current and future students?” says Neuhart.

When reflecting on his role as a Student Ambassador, he notes it is a rewarding experience. He has had the opportunity to meet and work alongside individuals from “all walks of life” who are considering a path in nursing. He remembers how scary beginning the nursing education journey can be and set a goal to use his platform as an ambassador to help “turn the fear into excitement” for future students.

“Being a Galen Student Ambassador has allowed me to take my amazing Galen experience and pay it forward to the next generation of Galen students,” exclaims Neuhart.

He is set to graduate from Galen’s BSN program in January and has accepted a position in the ICU beginning in February. Neuhart offers a final piece of guidance for anyone who needs one last push to begin their nursing journey at Galen College of Nursing.

“Starting something new can be terrifying, but you’ve done the research and taken the steps, and now is the time to take the leap of faith and start. Nursing can take you so many places and you can touch the lives of so many. It IS worth it.”