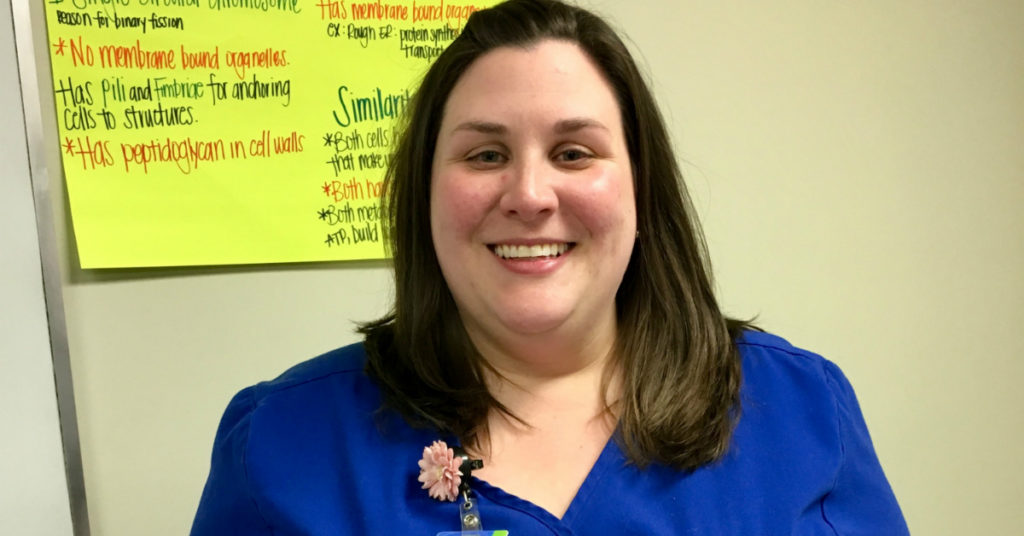 Galen College of Nursing Associate Professor Ellen Fulmer had a much different upbringing than most people. She was raised in a home with a blind father and a legally blind mother.  Her parents were unable to read traditionally to her, which caused her to struggle in school at an early age. Eventually, she was diagnosed with dyslexia and often transferred from school to school.

Fortunately, The Academy for Individual Excellence helped Fulmer overcome her learning deficits, and she graduated with 16 students in her senior class. Both of her parents are attorneys, so it was expected that she would go to college.

Fulmer attended Bellarmine University. As she participated in study groups, her friends suggested that she become a teacher. She also enjoyed working as a peer tutor, so teaching was on the horizon. Halfway through her studies in the nursing program, she got engaged to her high school sweetheart. He asked her to transfer to Eastern Kentucky University where she completed her bachelor’s degree.  She eventually earned her master’s degree from Indiana Wesleyan University.

Fulmer worked as a nurse in various areas such as University Hospital at the University of Louisville and Norton Women’s and Children’s Hospital.  Providing precise instructions to her patients on how to care for themselves once they returned home also fueled her love of teaching.

In 2010, Fulmer landed a faculty position to work at Galen. One of the many things the “super proud” associate professor loves about the College is the support it provides to students.

“I love that my students talk to me all the time,” she said. “They know we’re always available to help them. I’m so proud of their hard work.”

And it’s clear that her students are just as proud of her. Fulmer’s photo was recently featured in a Facebook post celebrating National Wear Red Day, and the post received over 200 likes and more than 50 glowing comments from students. Ironically, Fulmer doesn’t use Facebook, so she wasn’t aware of the praise. However, she believes the secret to her success as a teacher is her ability to connect with people.

“My mom always said if you set me in front of a brick wall, I would talk to the brick wall. That is me. I love to get to know people; I like to care for them,” she said.

Fulmer uses different methods to help her students retain information. Some of them include clicker questions, which allow students to answer anonymously, while also testing themselves. Matching cards appeal to students who excel with hands-on instruction. The auditory learners record Fulmer’s lectures, and they frequently tell her she’s “very animated.”

“I’m very loud,” she said, laughing. “They’ve said, ‘I can hear you in my head’ while they are taking their exams.”

When Fulmer teaches her anatomy courses, she reserves the science lab to create different projects.  “Sometimes I pull the playdough out, and we make atoms,” she said. “We do a lot of different hands-on activities versus just me being in front of the class reading from a slide.”

Fulmer enjoys teaching a variety of courses at Galen and plans to pursue her doctoral degree at the University of Southern Mississippi.

“I believe God has prepped me for this path,” she said. “My educational background is distorted and as crazy as it was, it prepared me to help our students, and that’s my passion. I love to help them have that ‘aha!’ moment.”

Favorite candy: Kit Kat
Favorite sports team: University of Kentucky Wildcats, all the way. My entire family graduated from UK – my mom, dad, brother, sister, and grandparents all graduated from UK. I did not graduate from UK, so I was the odd man out. But UK is ingrained in my blood.
Favorite food: Ice cream, or any carb known to man! But, yes, I love ice cream.
Foods you hate: Anything pickled, like pickled beets.
Favorite hobby: I love to read and paint.
Favorite movie: Harry Potter, and my favorite books are the Harry Potter series. I also loved The Princess Bride, because it’s fantasy and it’s funny.