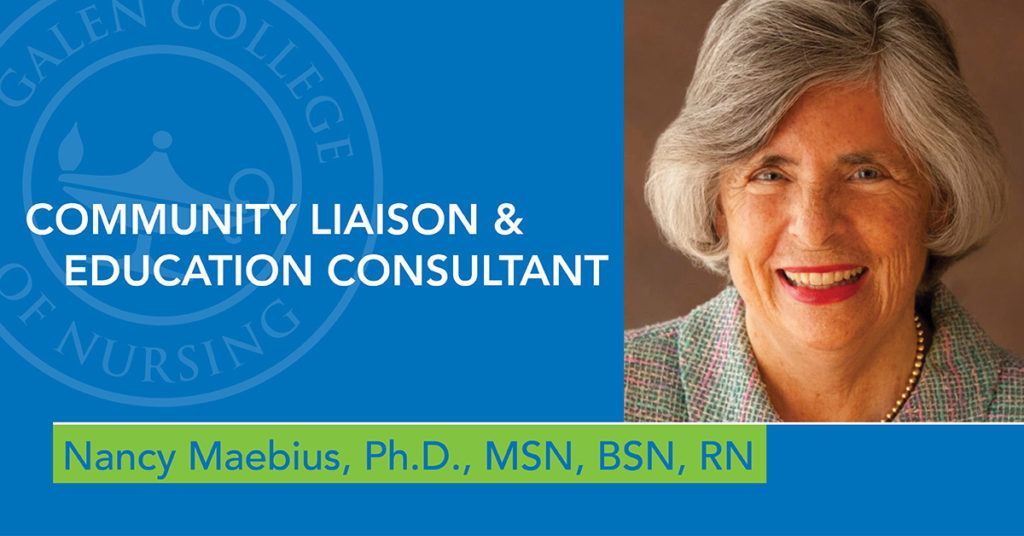 As the author of several textbooks and namesake of the resource center, Community Liaison and Education Consultant Nancy Maebius’ name stands out at the San Antonio campus of Galen College of Nursing.

Maebius, Ph.D., MSN, BSN, RN, has served as a consultant, educator and faculty member at Galen for 28 years and has written several textbooks and guides for Galen’s VN program.

Her tireless service to Galen and passion for vocational nursing (VN) led to the naming of San Antonio’s campus student resource center in Maebius’ honor in 2012. Among the speakers at the dedication ceremony was former Mayor Julian Castro, who is now a 2020 presidential candidate.

The visionary leader continues to leave a mark in an industry that is close to her heart: nursing.

Maebius, whose father was a physician, grew up in St. Louis, Missouri, the oldest of three children. Her parents encouraged them to pursue the career of their choice, so with an interest in science and psychology, she decided to pursue nursing education.

In 1963, Maebius graduated with a BSN from the University of Michigan in Ann Arbor and moved to Washington, D.C., where she worked at the National Institutes of Health.  Two years later, she married her husband, who studied law at George Washington University. The couple moved to Austin, Texas, in 1966 for graduate school where she attended the University of Texas in Austin’s inaugural Master of Science in Nursing program.  She was also one of four founding faculty members in 1969 at the University of Texas Health Science Center School of Nursing in San Antonio and served on the faculty for nine years.

In 1985, Maebius began working in staff development for Humana Women’s Hospital. Six years later, she was recruited by Humana to help create the school’s curriculum and teach in the Humana Health Institutes’ VN program. The Institute’s name was later changed to Galen College of Nursing.

For more than a decade, Maebius has taught Anatomy and Physiology and pharmacology in the VN program to over 1,100 students.

“I enjoyed working with a diverse group of students ranging in age from 20 to 61, many of whom were first-generation college students,” she said.  “The role of LVNs has expanded over the past 30 years, and many of our VN program graduates have continued their education, earning ADN, BSN, and MSN degrees.”

Maebius, who completed her doctoral work in curriculum and instruction from UT Austin in 1990, said teaching at Galen was an excellent opportunity to apply her research in the VN program.

“Reflecting on my years at Galen,” she said, “I have watched the school grow from one class of 30 VN students per year to our current enrollment of over 1,700 VN, ADN, and BSN students, while retaining excellence in the quality of the curriculum, faculty, and staff, and administrative leadership.”

Maebius added, “There has been a continued shortage of nurses, and I appreciate Galen’s single-purpose focus of nursing education that supports the critical need for nurses. I look forward to seeing what the next years will bring for Galen.”