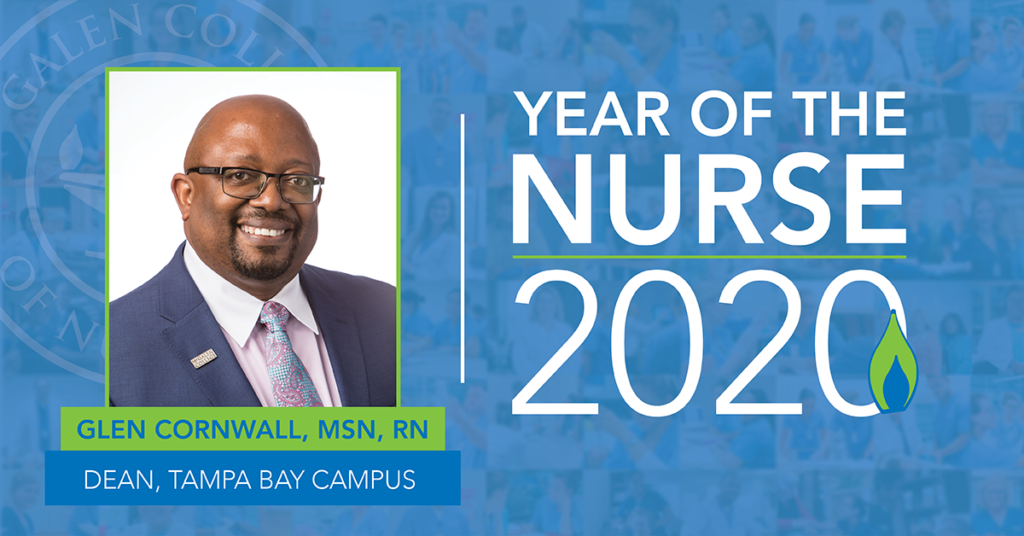 What started as a two-week vacation back to the island of his birth turned into a major career opportunity for Glen Cornwall, Dean of Galen College of Nursing’s Tampa Bay Campus, and he wouldn’t change a single moment of it.

Glen was born in Antigua, then his family moved to the U.S. Virgin Islands when he was 2 years old. He started his medical career in 1985 as a Navy medical corpsman stationed with the Marine Corps. He was involved in a few combat operations – including serving in Desert Storm – before leaving the military and moving to the Tampa Bay area to work as an EMT.

One year, he and his wife went on vacation back to the Caribbean, and while in Antigua, he noticed there wasn’t a good Emergency Management System in the country. So, he reached out to the local medical director at the hospital and, as he says, “one thing led to another, and I ended up starting a new EMS program for the hospital. What started as a vacation turned into moving to Antigua for 7 years!”

Once he had the system up and running for the entire island – “you can’t tell the difference between what they have there and what we have in the U.S.,” he says – he started thinking about returning to the U.S. to continue his education. He moved back to Tampa and started by working as a paramedic while he got his nursing degree, then moved into nursing education, where he felt he could help more people.

“I started as a clinical instructor in Galen’s LPN program,” he says. “Then I was asked to take on a couple of theory courses, which then turned into most of the theory courses, along with the clinicals. Then the campus president asked me to be program director for the LPN program. At first, I said no because I loved teaching, and I walked out of his office. But when I closed the door, I stopped, and I said to myself, ‘This might be your chance to help more students. You’ll regret it if you don’t take this chance,’ so I turned back around and went back into his office and told him I’d take the job.”

Now, along with serving as Dean of Galen College’s Tampa Bay campus since December 2018, Glen is waiting to defend his dissertation to complete a Ph.D. in Nursing from Barry University. The dissertation is about the lived experience of the informal caregivers (those with no medical training) of scleroderma patients, something that hits home for him because his wife – a nurse who has dedicated her life to caring – has the rare condition.

“As a young nurse, I had a patient with scleroderma and saw what her family went through,” he says. “After my wife got diagnosed, she and I started a support group in the Tampa Bay area, and in talking with other families, we realized there are not a lot of resources. I hope this will shed some light on the condition and also share these experiences so other caregivers will be able to help their loved ones.”

Throughout his entire career, as he has traveled around the world with the military and as an accomplished musician, Glen feels there’s nothing that’s not worth trying to accomplish. But there’s one word he tries to avoid.

“I tend not to use the word ‘change,’ because in nursing, if you say you’re going to change something, everyone gets upset,” he says. “So, I tell people that we’re making progress instead, because progress goes in only one direction. After all, who’s going to be against making progress?”