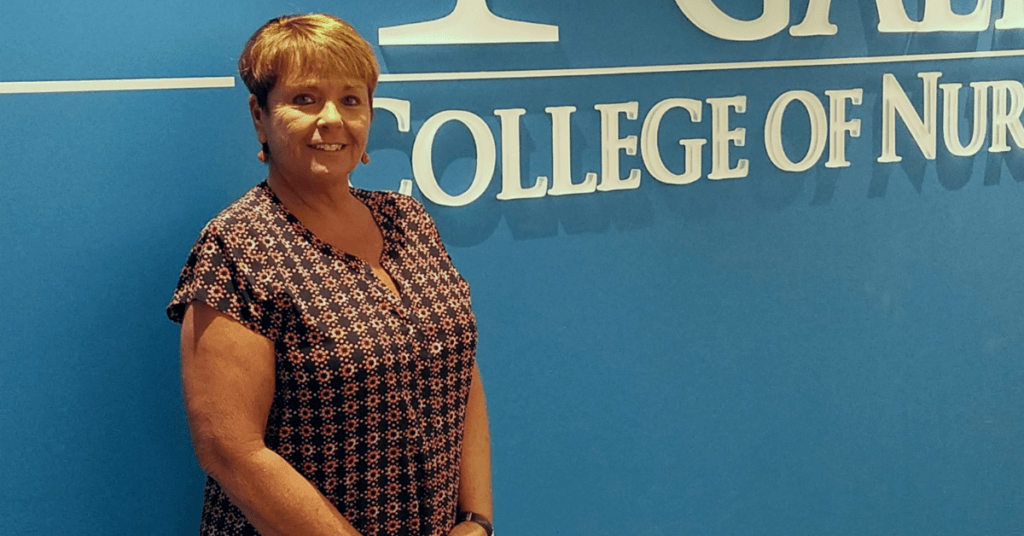 Senior Director of Financial Aid Joni Penland has watched Galen College of Nursing grow up. She had a front-row seat to Galen’s humble beginnings in 1989 while she worked for Vice President of Nursing Kathryn Mershon, RN, MSN, CNAA, FAAN at Humana.  Penland began working in the Audit Department at Humana in 1980 and eventually became Mershon’s executive assistant.

In 1982, there was a high demand for nurses, and Humana desperately needed to staff its hospitals.  Mershon was asked by Humana officials to look for ways they could address the severe nursing shortage, including starting their own nursing school.

“They looked at areas with the greatest shortages with Humana hospitals in the vicinity,” Penland said.  “That’s why we created campuses in Tampa, San Antonio, and Louisville.”

Penland began her career as a part-time office manager at the Louisville campus before moving to Galen’s corporate office where she was responsible for accounts payable and receivable. When an opening for a director of financial aid position became available,  Penland was thrilled to take the reins in management for the three campuses.

“I’ve always appreciated and thought it gave me a unique perspective going from a part-time office manager to the senior director of financial aid rather than if you come in as a leader, and you haven’t seen the other side of it,” she said. “I was ready to dive in for the challenge to be the director for three campuses at that time, and I have been here ever since. It’s amazing how far we’ve come as a college.”

In the early ‘90s, Galen’s Louisville campus started with just three instructors who taught pre-licensure, vocational and practical nursing programs and the classes were held above a radio station in downtown Louisville.

“Basically, everything outside of our clinicals was held on the third and fourth floors of the building at 4th and Chestnut,” she said.  Eventually, parking became a challenge for students. As the school continued to grow, there just wasn’t enough space for parking and more classrooms, Penland said. In 2004, Galen moved its current operations to its four-story Zorn Avenue building.

Three years later, Galen opened its Cincinnati campus. However, before bringing Cincinnati on board, the associate degree bridge programs were established at the other three campuses.

“That was our first nursing degree program and it was a learning process,” Penland said.  “Since that time, we have added the online RN to BSN, prelicensure associate, and prelicensure bachelor degrees.  In our efforts to continually look for new ways to support the nursing profession. We are all looking forward to enrolling our first group of graduate students in our MSN program. The growth has been amazing.”

And, the numbers continue to rise. When Penland started at Galen, the school’s population was roughly 600 students enrolled in one program across three campuses. Now, there are six nursing programs and upwards of 7,700 students who have received financial aid in the last year.

In 2013, Galen opened its 3,000-square-foot simulation center at its River Green campus in Louisville, which was dedicated to Mershon. And, in 2017, Galen launched a campus in the Appalachian Regional Healthcare (ARH) System Center building in Hazard, Kentucky, offering the associate degree in nursing through a two-year program and LPN to ADN Bridge. Galen and ARH joined together to offer additional nursing education opportunities in the region.

Penland credits Galen’s 30-year success to its ‘forward-thinking’ employees. Each program’s curriculum and faculty have received positive responses, she said.

“We are proud to have strong growth in our student enrollment.  Our graduates are well-prepared for the real world and transition into rewarding nursing careers, which helps to change their lives and patient outcomes,” she said. “This couldn’t be done without our forward-thinking employees. Galen’s future is limitless.”