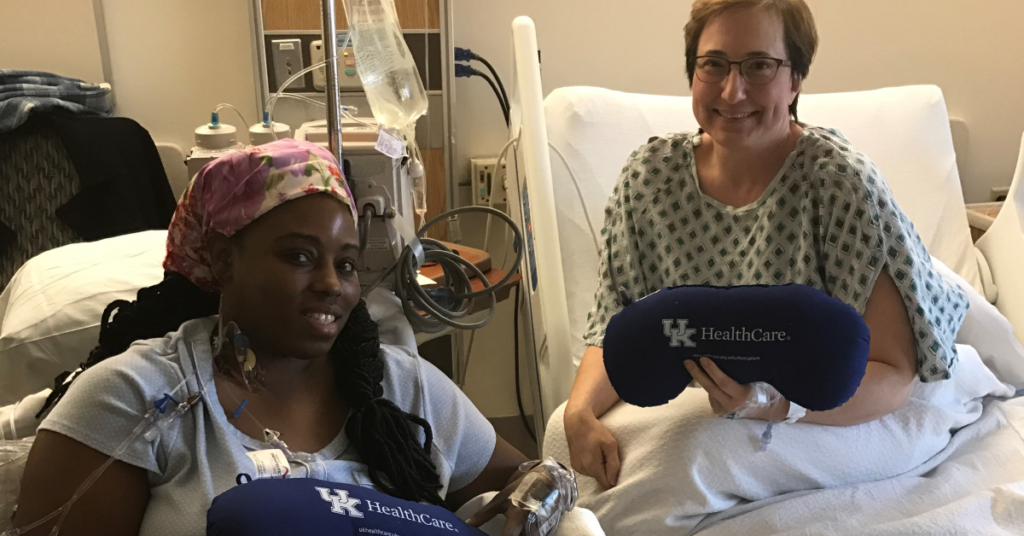 Not only do Galen College of Nursing instructors demonstrate the importance of kindness and compassion to their students, but they also practice what they teach outside of the classroom.

In February 2016, Galen College of Nursing Clinical Learning Lab Coordinator Dashanda Stanton learned that she had polycystic kidney disease, a genetic disorder that can cause cysts to develop in the liver and other organs. The disease can cause serious complications, including high blood pressure and kidney failure.

As a result, Stanton started dialysis for several months even while she taught at the Louisville campus. Ultimately, the procedures were only temporary solutions, and it was inevitable that she needed a transplant. Since Stanton inherited the disease from her father, and her mother had donated her kidney to him, Stanton was forced to seek other ways to spread the word.

She connected with an organization called KidneyBuzz, which helped her to share her story on Facebook. KidneyBuzz created her page, and Stanton monitored the photos and other content. Stanton’s Facebook friends also helped to promote her story, and eventually, Associate Director of Curriculum and Instruction Mary Alice Tolbert noticed the post about her colleague’s condition.

Once Tolbert saw Stanton’s story on Facebook, she didn’t think twice about undergoing the tests to see if she was a match.  Although she was aware of the risks of organ donation, Tolbert was confident her health background would be beneficial to Stanton.

“I’ve known a couple of people who’ve donated kidneys in the past, so I knew a little bit about it. I thought, ‘You know what? I could do that,’” Tolbert said. “I’m fortunate enough that I have a pretty non-eventful family history. We don’t have any major diseases in my family; my dad lived to be 90 years old, and his mom lived to be 99 years old.  We don’t have major cancers, so it’s like I won the genetic lottery.”

According to the University of Kentucky (UK) Health Care’s website, a compatible donor must be at least 18 years old and in excellent health. The donor does not have to be a blood relative; it could be a spouse, friend, co-worker or anyone who is willing to help. Tolbert fit the criteria.

“I was raised with the belief that if you can help someone, you should,” she said. “What I did was a little more unusual, but I understand medicine. I understand health risks, and I’m healthy. I’m not fearful of things like that, so it just suited my personality.”

Tolbert started the process of undergoing the tests in the fall at UK. While she awaited the test results, she notified her supervisors because it would mean two faculty members who would be away on medical leave. After a few months, the hospital called to clear her as a match.

At Galen, Tolbert requested that Stanton come to their program director’s office so that she could share her life-changing news. Stanton said she started nervously thinking, “What did I do?” Coincidentally, it was the holiday season, so Tolbert was even more thrilled to inform Stanton about her special gift.

“It happened to be Thanksgiving week, and I asked to meet with Dashanda in our boss’ office,” Tolbert said. “I said to her, ‘By the way, I’ve been tested and I’m a match for you. Do you want my kidney?'”

Stanton was overwhelmed and speechless.  “‘Are you sure? Have you even had surgery before?’ And Mary said, ‘No, just babies. Come on, let’s do it!’” Stanton recalled, laughing. “She seemed more excited about the surgery than I was.”  Stanton, who was still on dialysis, had to continue the treatments up until the transplant. Tolbert and Stanton both underwent surgery on February 2, 2017, and the recovery took three months.

Today, Stanton calls her health a “total turnaround.” Because this is a genetic disorder, Stanton has two younger cousins who have the same symptoms as she had in the past.

“After you get the transplant, you’ll realize how sick you were before. The thing about this disease is that it just kind of hits you. There aren’t any symptoms like pain or a runny nose. Instead, you feel tired all the time. A lot of people with this disease might think, ‘I just need to rest’ and never consider seeking medical attention until it’s too late,” she said. “Now, I have so much energy and I’m able to do more. I try to go on vacations at least two or three times a year.”

Stanton also is determined to lose weight to maintain the health of the kidney. Some of her medications’ side effects included weight gain.

She and Tolbert have agreed to participate in the National Kidney Walks in Louisville every year. The pair also were speakers at a 2018 Galen graduation. Tolbert and Stanton’s mom also have developed a special bond because they are both kidney donors.

According to OrganDonor.Gov, more than 113,000 people in the United States are currently on the waiting list for a lifesaving organ transplant, and Stanton encourages people to get checked to help someone in need.