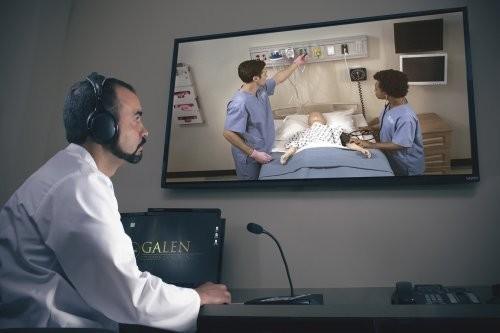 October 24, 2013 — Louisville, KY — Galen College of Nursing has opened a 3,000 square feet simulation center at its River Green campus, to be dedicated to College founder and Louisville resident, Kathryn M. Mershon, MSN, RN, CNAA, FAAN, with a dedication ceremony to take place on Tuesday, November 12, 2013, from 4:30 to 6 p.m. The dedication ceremony will be kicked off by Louisville Mayor Greg Fischer and other city and state leaders. This marks the completion of phase one of Galen’s Advanced Simulation Center development, which will double in size with phase two, scheduled for completion mid-2014. When complete, Galen College of Nursing will house one of the state’s largest high-fidelity nursing simulation centers.

Phase I of the new lab features three simulation rooms with supporting control and debriefing rooms. High-fidelity simulation refers to structured student learning experiences with the use of technologically advanced computerized mannequins, which are anatomically precise and reproduce physiologic responses. Students are administered sequential decision-making events within an environment that mimics a clinical setting and instructors can control the mannequins’ responses to the students’ interventions. The state-of-the-art laboratory addresses a critical component of nursing education’s ability to translate nursing theory into safe and effective patient care.

Mershon was Humana’s Chief Nursing Officer when the decision was made to open a nursing school to address a severe nursing shortage in the late 1980’s. Placed in charge of its creation by David A. Jones, Sr., Humana co-founder, she was instrumental in creating the organizational infrastructure, the development of curriculum and the approval of regulatory bodies to open three campuses of the Galen Health Institute, serving as President until 1992. Mershon was called upon again in 2006 to serve as Chairperson of the College’s independent board of directors.

Mershon is particularly pleased to see this use of technology evolve at the college she helped create. This technology is critical in the preparation of students to go into clinical settings with live patients. As nursing educators, it is invaluable to the development of critical thinking skills and the ability to assess and make real-time decisions. Students are also able to practice a procedure in a deliberate, controlled environment. It helps better prepare new graduates for transition into the workforce.

Said Mark Vogt, President Galen College of Nursing, “As a founder of the College and our board chair of seven years, Kathy Mershon has been unwavering in her efforts to provide nursing education that is both accessible and of the highest quality. The dedication of the Advanced Simulation Center honors Kathy’s enduring commitment to preparing our students to become competent and caring nurses and to advancing the profession.”

About Galen College of Nursing

Founded over 20 years ago, Galen College of Nursing is one of the largest private nursing schools in the United States. With a focus solely on nursing education, the College offers practical/vocational nurse (PN/VN) and associate degree nursing programs to students on its campuses in Louisville, Ky., San Antonio, Texas, Tampa Bay, Fla., and Cincinnati, Ohio. Galen is accredited by the Southern Association of Colleges and Schools Commission on Colleges. For more information about Galen College of Nursing, visit our website.