‘Galen Instilled in Me the Necessity of Being Prepared’ 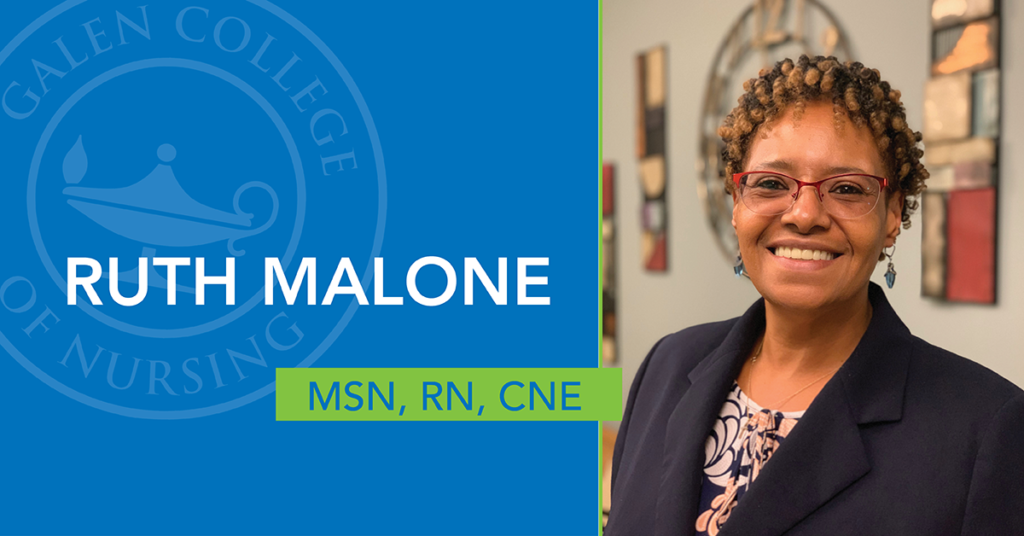 If you need an example of someone who has been dedicated to Galen College of Nursing, you will not have to look any further than Louisville native Ruth Malone. She has been a student, clinical instructor and director of clinical education at the Louisville campus.

But nursing wasn’t Malone’s first career.  She spent several years working in the accounting department at the behavioral health facility Seven Counties Services in Louisville. Her connections with doctors and patients at the facility inspired her to pursue her ultimate goal, but there was one thing that stood in her way.

“I’d always wanted to work in nursing because I come from a family of nurses, but I didn’t want to take the science classes,” she said, laughing. “But when I would get the opportunity to talk to the patients, several of the psychiatrists would say, ‘You really do well with building a rapport with our patients. Have you ever thought about nursing?’ And I thought, ‘Well actually, I had thought about it.’”

She decided to enroll in nursing classes at Galen. When Malone participated in her study groups, her peers pointed out that she had the ability to explain their class assignments in great detail. In 2003, she completed the Practical Nursing program, then graduated from the LPN to ADN Bridge program three years later.

One of her favorite memories was being honored for an Outstanding ADN Student award. The recipient is recommended for the award by faculty and students. Malone said Galen’s hands-on clinical learning labs were invaluable to her career in nursing education.

“Galen instilled in me the necessity of being prepared. It wasn’t just about doing the minimum. You want to be able to do more,” she said. “As a student, I thought, ‘There are all these clinical hours, why do we have to do all of this?’ But then when I graduated and started working, I was prepared at a level that perhaps others weren’t and had graduated with the same degree.”

Malone eventually returned to the College as a clinical instructor and then was promoted to director of clinical education for four years.

“I love that I have the opportunity to empower nurses,” she said. “It’s like an educator’s dream.”

Malone is happy she decided to take those science classes and encourages Galen students to be open-minded about their goals in nursing.

“Nursing is phenomenal. There are so many different avenues you can take. There’s really no limit to what you can do. You also must have a passion because I believe that nursing is a calling,” she said.  “You’re going to school to prepare yourself to take care of somebody that you’ve never met. You’ve got to really want to help make a difference in someone’s life.”