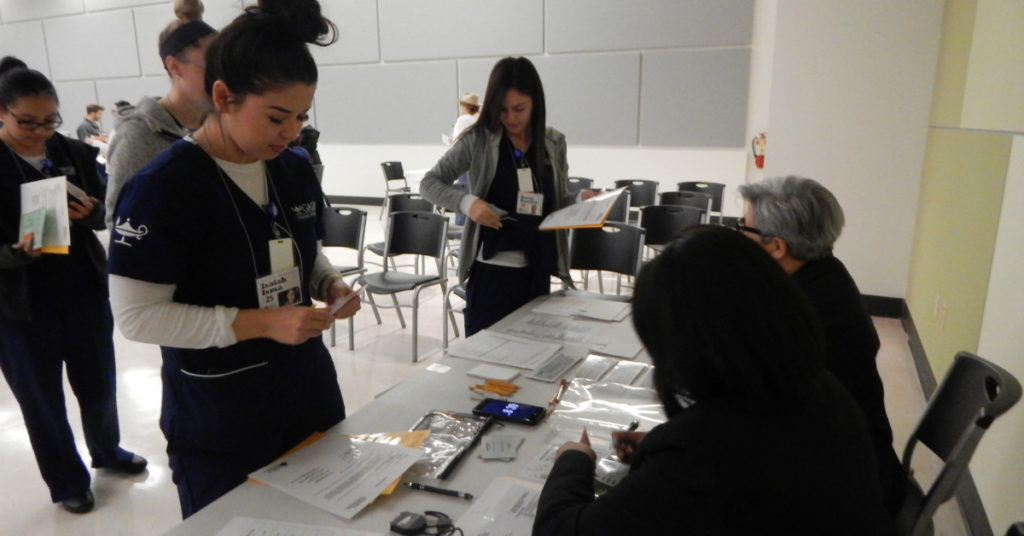 Welcome to Realville, USA. Galen College of Nursing San Antonio campus students were transported into the imaginary town with real-world lessons about poverty. College Director of Simulation and Clinical Learning Labs Dr. Renae Schondel, who organizes the four-hour poverty simulations, said the goal is to provide an eye-opening view into patients who lack sufficient resources.

Originally developed by Missouri Community Action Network, the poverty simulations used low-income volunteers to demonstrate the economic and healthcare challenges they face every day. Dr. Schondel learned about the simulations held in San Antonio from a colleague who suggested that she participate in the hands-on program in hopes that she would bring it to Galen. After she played a role in the simulation, she was eager to find a location that was as large as a basketball court to replicate the fictional town.

Since February, she has been organizing the simulation at a food bank. Last month, she switched to a local church where more than 80 students from VN, ADN, and BSN programs immersed themselves into the various poverty scenarios. Students had to learn how to navigate through all of Realville’s difficult situations.

“We had a bank, school, health clinic, quick cash store, homeless shelter, pawnshop, jail, supercenter similar to Walmart and a community action center that helps with rent vouchers and utility bills,” she said. “Some of these places were not always on the up and up. For example, the quick cash business might stiff you or the pawnshop could cheat you out of money, similar to what might happen in reality.”

And, of course, the town needed residents.

Each student was given a packet that contained a synopsis of the role they would play in a family. These descriptions ran the gamut from a single older person to multi-generations that included pregnant teenagers. If the part called for a student to play a person who received Social Security benefits, their “check” was included in the packet. The details had employment status and expenses for a month. Dr. Schondel also provided factual statistics about poverty in the San Antonio area for the participants.

“During the pre-brief, we asked students to look in their packets to find out the gender and age and act accordingly,” she said. “For example, if you’re an elderly person and you have various health conditions, you should act out those symptoms.”

Several faculty and staff members also got in on the act as a social worker or employer. “Well, our Realville employer worked from a no-rehire policy and was very no-nonsense,” she said, laughing.

Dr. Schondel, who has been in nursing for 30 years, plans to hold the simulations every quarter. She wants the poverty simulations to give nursing students an understanding of the sensitive issues their patients might face at an outpatient clinic, including the cost of prescriptions.

“Healthcare providers learn about certain medications from the companies’ representatives. They hear, ‘Well, this is going to take care of the symptoms,’ and then they think, ‘OK and then I’ll prescribe it’ while not realizing that it may cost $1,500 a month, even if it’s covered on the insurance. There’s no way that the patient can afford it,” she explained. “As a result, the patient doesn’t take the medication as prescribed and lands back in the hospital. It’s the nurses who find out from their patients, ‘I didn’t get it filled, because I can’t afford it.’”

Once the simulation was finished, Dr. Schondel gathered the students for a debriefing session where they provided feedback about the scenarios.

BSN student Krystal Edwards said the simulation was beneficial, especially for anyone who has never experienced what it is like to live in poverty. It also helped her learn how to treat patients from a nursing perspective.

“It was fascinating, especially for people who had never lived below the poverty line. As nurses, we can help guide patients to the correct avenues such as how to get food stamps and other important items, so they’re able to still get healthcare,” she said. “The simulation definitely helped me think differently about a plan of care. I look forward to participating in the simulation next quarter.”