Students’ Presentations Take the Spotlight at Kentucky League for Nursing 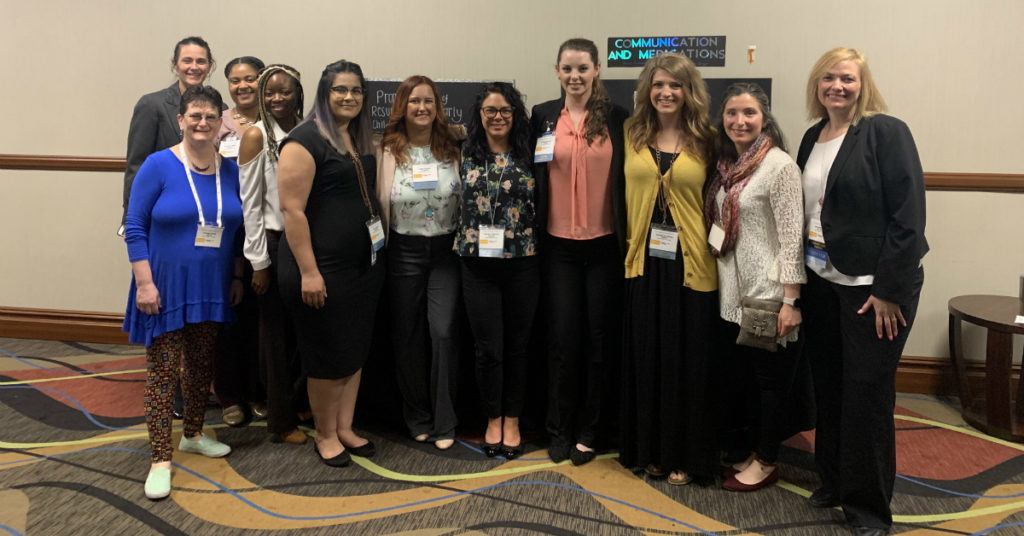 Two student groups from the Louisville campus of Galen College of Nursing recently took their research on the road to the Kentucky League for Nursing’s (KLN) 15th Annual Nurse Educator Conference in downtown Louisville. Brandy Crompton, Taylor Coffman, and Katherine Draper presented their poster titled,  “Communication to Prevent Medication Errors,” and Amber Gelnett, Keila Mendez, and Augustina Osei submitted a poster titled, “Promotion of Resurgence in Early Childhood.” Both presentations were accepted at the conference.

Faculty Advisor Dr. Andrea Houser, who teaches a Communications and Teamwork class, recommended that her students submit an abstract to a professional organization’s state conference. Each student is placed on a team of peers, and the team has to create and present a poster presentation. The conference project teaches them critical-thinking and professional skills outside of the classroom, Dr. Houser said. She was thrilled both groups had the opportunity to network with more than 150 nurse educators at the conference.

“It’s that professionalism piece that students do not see by just going to class day after day.  Going to a conference is not only the place where networking happens but also role modeling. I feel strongly that students should be included in conference activities,” Dr. Houser said.  “In this project, all I did was show them the way, and they took ownership of the project. I could not be more proud of them.”

The two groups were given a selection of topics, and Gelnett, Osei, and Mendez’s poster highlighted an issue that has been making headlines. The group was interested in how measles has returned with “such a full force,” and it was a subject that was discussed in their class for a few weeks, Gelnett said.

“We also wanted to help everybody bridge that gap between theories versus evidenced-based practice, and other beliefs that might deter people from getting vaccinations,” she said. “Our topic was well-received since it’s such a prevalent issue.”

“Many of the nurses asked us several questions, and it forced us to really think about our responses,” she said. “Everybody was really sweet and very helpful. They helped us to learn a lot.”

Crompton, Draper, and Coffman’s group decided to display the seriousness of medical errors at the conference. It was also a “hot topic” discussed in their class, Coffman said.

“Even though it’s a simple, initial task that you learn, it’s something that gets neglected pretty often,” she said. “And in the United States, medication errors are still on the rise despite all the efforts that educators are putting into place, trying to prevent them.”

Crompton and Coffman hope that more nursing students present at conferences similar to KLN. Both students called the daylong presentations “a great experience.”

“I felt proud when Dr. Houser asked us if we would do it. I’ve never written an abstract before, but that was a fun thing to learn well enough to be accepted,” Crompton said. “It was a great experience because we interacted with nurse educators. I took away a lot.”

Once her group’s presentations were completed, Coffman said she was inspired by the advice many of the conference attendees shared with her.

“Everybody there kept saying to us, ‘Make sure you put this on your resume.’ ‘This is amazing! You should be proud of this,’” she said. “And then I remember a few of the KLN board directors kept telling us, ‘This is what separates you from everyone else. This is showing your leadership and power. This is what’s going to take you further.’”