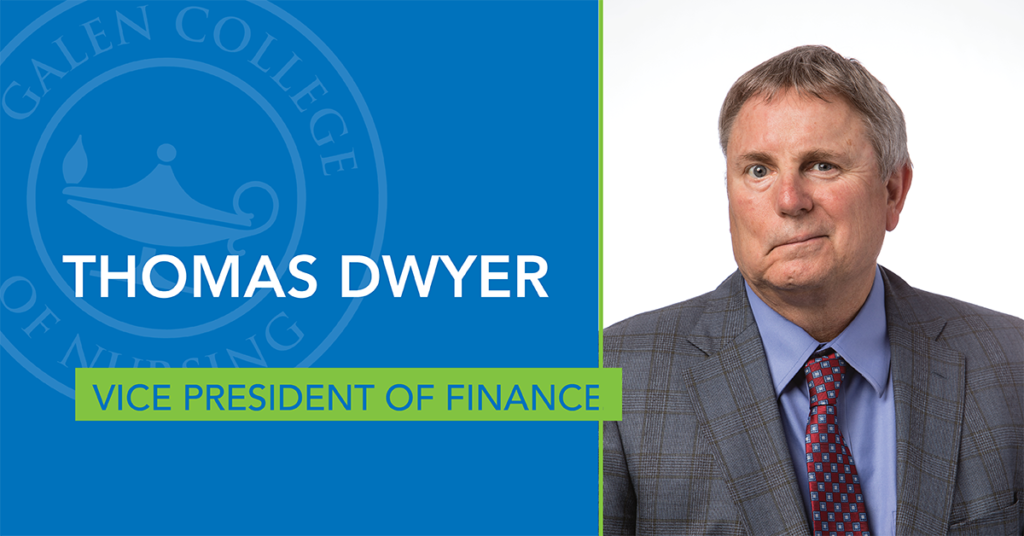 Galen College of Nursing employees might immediately recognize Thomas Dwyer’s voice as the narrator of the New Employee Orientation presentation. Affectionately known as the resident historian, Dwyer has had many roles that have made an indelible impact at the College.

Over his 29-year career, Dwyer has formally served as Controller, Vice President of Administration, and Vice President of Enrollment Management. In his current role as Vice President of Finance, Dwyer provides oversight of the accounting and financial matters for the College.  Main administration campus employees may recognize him as the guy who always takes the stairs from the parking garage all the way to the fourth floor. But his most important role may be as an informal advisor to many staff and faculty, who’ve used his vast knowledge to provide better service to the College’s students.

Education has always been a priceless asset to him.  In fact, immediately after graduating with a degree in accounting from the University of Kentucky, he started working for Jostens Education. The company had 30 business schools around the country, and he began learning the ropes about the development of school operations.

When Tri-State Driver Training wanted to build a truck driving school in Dallas, Texas, Dwyer was recruited to get the program in gear.

“I would leave on Monday and come back on Thursday night, working 10 to 12 hours a day to get the school up and running, while I was learning their system in Ohio so that I could implement it in Texas,” he said. “We had to hire and train everybody, which meant starting the initial departments for the payroll, human resources, accounting, financial aid, and the registrar’s office.”

During this same timeframe, he learned from a friend who worked at Humana that the health care provider was starting a school. Dwyer was happy to advise his friend about his experience in education.

Several years later, Humana needed to hire someone to help manage their three schools in Louisville, Tampa Bay, and San Antonio, and Dwyer came with high recommendations. However, the meeting wasn’t anything like he expected.

“It was the strangest interview I think I’ve ever had. I was told, ‘We need you to respond to an inquiry from the Department of Education.’  So, I sat down in front of a computer and typed my responses. Afterward, they sent it over to the legal department and then to the Department of Education. Then, we went to lunch,” he recalled. “After lunch, I asked, ‘Do you have any questions for me?’ and they responded, ‘Well, you’re already in.’”

After spending five years of traveling for Tri-State Driver Training, the Kentuckian was happy to return home to Louisville in 1991. Dwyer was the sole accountant who consulted with one of the founders, Kathy Mershon on a weekly basis to discuss school operations. His background was essential to campus leadership to establish a strong foundation, and he has provided his signature calm, practical advice to countless employees who want to make a difference in the lives of students and the people they work with.

Dwyer said coming to Humana Health Institutes was a nice fit. He found himself in familiar territory as he would travel to all three schools to hire and train administrators and employees.

He has been pleased with Galen’s expansion over the years and continues to see a promising future for students and the College.  “Learning the College’s history is valuable for our employees to understand so that we can continuously improve the student experience by building upon the knowledge we’ve accumulated over the years.  It continues to set us up for success.”

“In the next five years, I see us opening up new campuses and taking advantage of all the pathways that we’ve built over the years,” he said. “We started with one program, and now you can go all the way to your master’s degree at Galen. We’ve certainly come a long way.”