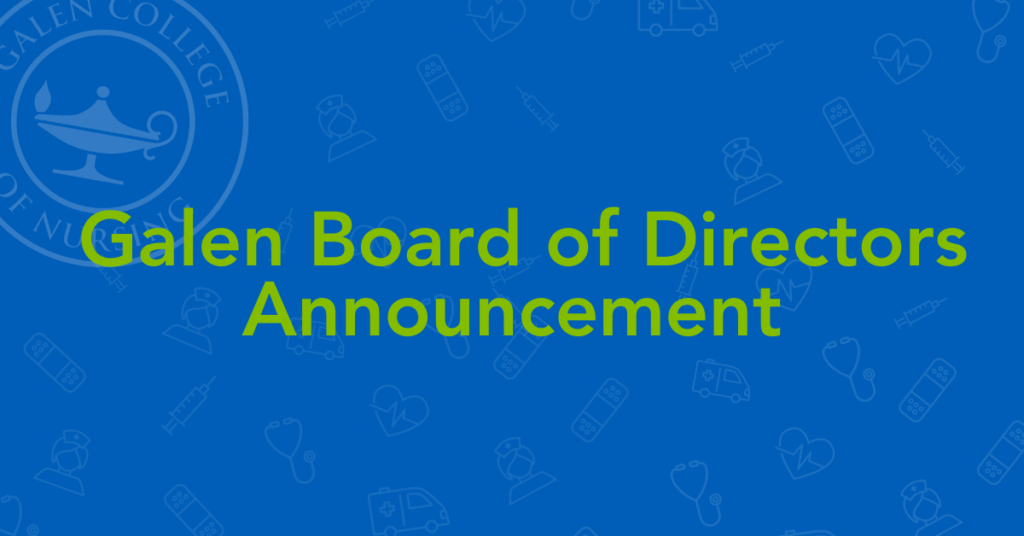 Galen College of Nursing recently announced several changes to its Board of Directors, most notably, after 16 years of dedicated service excellence, co-founder Kathryn Mershon, MSN, RN, CNAA, FAAN, stepping down as Chair. Along with Humana Co-Founders David Jones and Wendell Cherry, Mershon was instrumental in the foundation and development of Galen Health Institutes in 1994, which operated prelicensure practical nursing programs in three states and eventually became Galen College of Nursing in 2005. As Mershon steps down from this role, Galen College of Nursing celebrates her commitment and many contributions to the college and mission. She will continue to serve as a board member.

“The impact Kathy has had on our institution is immeasurable. We have been honored to have a nurse leader like Kathy guiding the way as we evolved into one of the largest nursing colleges in the country. Through her leadership as Board of Director Chair for over 16 years, she has helped us build nursing education programs that set the standard for quality,” said Galen College of Nursing CEO, Mark Vogt. “We are so grateful for her service as Chair and we thank her for her passion, dedication, and leadership. But this isn’t goodbye. Kathy will continue to serve as a Board member and continue to help Galen expand our standard of excellence.”

Galen College of Nursing has also announced Fran Roberts, Ph.D., RN, FAAN, will now serve as Chair. A board member since 2015, Roberts has provided invaluable guidance, insight, and thought leadership to the College. Robert’s distinguished career includes her tenure as President and CEO of the Fran Roberts Group, a consulting practice providing expertise on healthcare leadership and higher education. Previously, Dr. Roberts served as the Vice President for Strategic Alliances for the DeVry Healthcare Group. In addition, she was with Grand Canyon University from 2004 to 2010, where she began as Dean of the College of Nursing and was subsequently appointed Vice President of Strategic Business Alliances for the College of Nursing and Health Sciences.

“We couldn’t be more excited to announce Fran’s tenure as our Board Chair.” Mark Vogt stated. “Since she joined us in 2015, Fran has demonstrated an incredible passion for nursing education. Her dedication to the profession and Galen’s mission has been inspirational and we are honored to have her serve in this new leadership role.”

In addition, Dr. Sammie Mosier and Dr. Janice Brewington have been announced as new members of Galen’s Board of Directors. Effective immediately, Dr. Brewington and Dr. Mosier join the College amid unprecedented growth and expansion. In the last 12-months, Galen has added campus locations in Austin, TX; Nashville, TN; Myrtle Beach, SC; Richmond, VA; and Gainesville and Sarasota, FL.

“Dr. Mosier has a long history of working with Galen College of Nursing leadership, and we are grateful she brings her vast experience to our board.,” noted Mark Vogt. “Throughout her career, Dr. Mosier has been a passionate advocate for nurses, while driving clinical excellence and professional development. As a new board member, her powerful experience and influence will be felt in every facet of our institution. I cannot think of a better fit for Galen’s board of directors than Dr. Mosier.”

“We live in a historic time in the history of nursing education, with daunting challenges ahead. I believe Galen College of Nursing and HCA Healthcare is in a unique position to take on these challenges head-on to help support the nursing workforce for decades to come,” exclaimed Dr. Mosier. “I am thrilled to join my friends and colleagues on Galen’s board of directors to help raise the standard of care with well-prepared, confident future nurses.”

Janice Brewington, Ph.D., RN, FAAN, will be joining the board. She is currently the National League of Nursing (NLN) chief program officer and director of the League’s Center for Transformational Leadership. Dr. Brewington previously served as senior director and as a consultant for the NLN.

“Dr. Brewington is a leader and scholar in the nursing field, and we proudly welcome her to our board of directors,” said Mark Vogt, chief executive officer of Galen. “As a College, we are on the precipice of unprecedented expansion to access to nursing education in the United States, and Dr. Brewington will be a vital part of Galen’s ability to scale and evolve our best-in-class nursing education. We welcome Dr. Brewington to our Board of Directors with open arms.”

“I am honored to join the board of directors at this exciting juncture of Galen’s evolution and growing impact on the nursing field,” Dr. Brewington said. “I believe my experience perfectly dovetails with Galen’s mission and look forward to helping augment and enhance Galen’s high-quality standards for tomorrow’s nurses.” 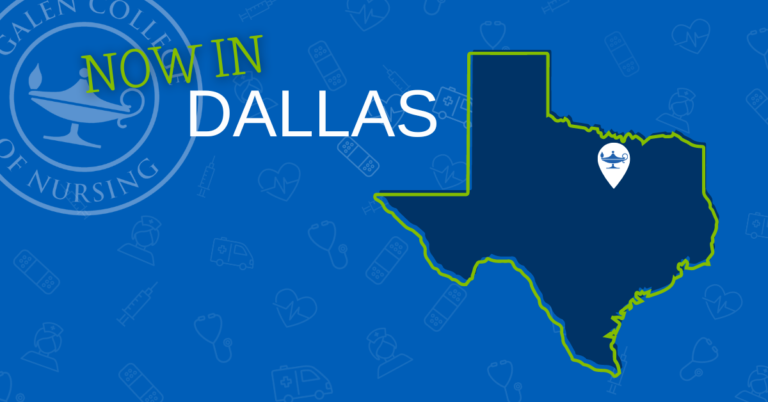 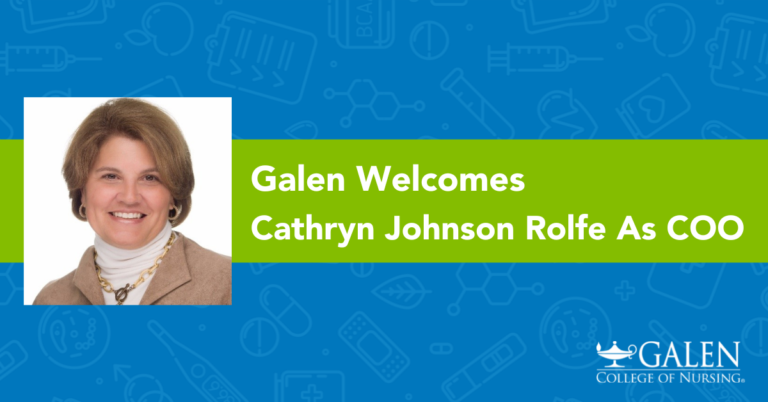 Galen College of Nursing has announced Cathryn Johnson Rolfe as Chief Operating Officer (COO). Rolfe will be the first COO for the 30-year-old College, which

The Higher Education Opportunity Act of 2008 (HEOA) requires that postsecondary institutions participating in federal student aid programs make certain disclosures to enrolled and prospective students, parents, employees, and the public.  Galen makes this information available to you online at https://www.galencollege.edu/consumer-disclosures/.