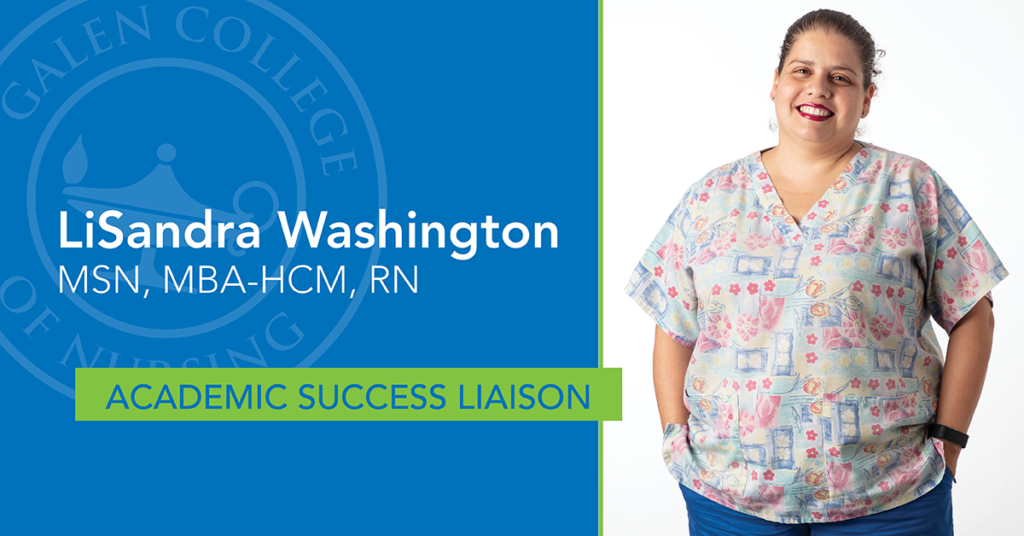 LiSandra Washington, MSN, MBA-HCM, RN, has always desired a career in healthcare. A native of Newark, New Jersey, Washington moved to Florida with her mother in 1993 and became a Certified Nursing Assistant.

Two years later, she saw an ad in a Tampa Bay newspaper for the Health Institutes of Tampa Bay, now Galen College of Nursing, and decided to advance her nursing education. She completed the Practical Nursing (PN) program and eventually was among the first graduating class of the LPN to ADN Bridge program.  After graduation, she was determined to pay it forward to aspiring nursing students.

“The education I received here was solid,” she said.  “It was important to our instructors that we became responsible healthcare providers. I wanted to return to Galen and give back what I received.”

Not only is Washington a proud graduate, but her husband, Jevon Washington, BSN, RN, is one, too. Before they were married, the pair agreed to enroll in Galen’s nursing programs together. He has completed the PN, LPN to ADN Bridge, and Bachelor of Science in Nursing (BSN) programs at Galen. Today, he teaches weekly CPR classes at the Tampa Bay campus and works as a home health nurse specializing in wound care.

Washington believes her education has given her many options in nursing over the last 15 years.  After graduation, she became a director of nursing for a pediatric home care company. Throughout her career, she has been a case manager, hospice nurse, interim program director, pediatric hematology/oncology nurse, and lead research nurse for a children’s hospital in Tampa.

In 2014, she joined the Tampa Bay campus as an instructor and is now an academic success liaison for the Associate Degree in Nursing (ADN) program. She also teaches pharmacology classes online and tutors students in pharmacology on-ground and online sections, fundamentals, maternal child, and ATI remediation. Washington is thrilled she is fulfilling her goal of helping Galen students.

“The PN program is an amazing program and a great stepping stone for students because it gives them a solid foundation and opportunity to start working as healthcare providers and find their passion in nursing,” she said. “When they find what they are passionate about, they will work hard and excel in it.”

Washington advises students to grow both personally and professionally.

“I am always encouraged to see Galen graduates making an impact in the healthcare arena and look forward to seeing them pay it forward one day as well in the workforce,” she said.  “There are so many avenues for LPNs to pursue in nursing.”

She credits her teaching style to one of her favorite and current Galen professors.

“Mrs. Theresa Kirk made me feel like a strong student and leader.  She made her students connect the dots, and the ‘aha’ moments were my best memories,” Washington said.  “She’s one of the reasons I came back to teach. When students get that same ‘aha’ moment, I feel as though I have done my job. I consider it a privilege to be able to pour back into them what she poured into me.”